I just dropped my daughter Lulu back at St. John’s University in Queens, NY after a month’s break, so I’m feeling a little blue (actually, more like deep purple). I’m also in a New York state of mind– meaning I’m simultaneously wishing I’d been given $1 billion in bonuses that I was spending at the St. Regis ordering room service and Jimmy Choo shoes – and wishing that I was out of the city, looking at a green field or some blue water. Of course, today’s topic is the Chattahoochee, so we’re actually talking about red-brown, not blue, water (although, having moved from Philly to Atlanta, I got a total upgrade from the filthy Schuylkill to the viscous but organically ochre Chattahoochee.) But enough about me …let’s get back to the river![picapp align=”left” wrap=”false” link=”term=chattahoochee+river&iid=6574961″ src=”b/5/4/9/Georgia_Governor_Declares_a453.jpg?adImageId=9332201&imageId=6574961″ width=”500″ height=”333″ /]

Chattahoochee (www.chattahoochee.org)is an Indian word meaning “river of painted rocks” and Atlanta’s local waterway is small but mighty (see it flooding last September, above). Its headwaters drain into Lake Lanier and comprise the smallest watershed to supply drinking water for any major metropolitan area. In fact, more than 70% of metro Atlanta’s water is dependent upon the Chattahoochee River Basin. The city sucks up about 450 million gallons every day– a fact that became painfully clear during the last drought when three states started fighting over the rights to the water, and Atlantans were forced to stop watering their stupid lawns every two minutes. Our intrepid river begins as a tiny spring in the southeast corner of Union County below the Appalachian Trail, then flows southwest through Georgia and into Florida where it cleaves unto the Flint River and becomes the Apalachiola, ultimately draining into the Gulf of Mexico.

In 1993, environmental rock stars Rutherford and Laura Turner Seydel decided to start a Riverkeeper organization in Atlanta (following the model of the original Riverkeeper on the Hudson), whose mission was to educate, legislate and protect this magnificent resource that flows through our city. 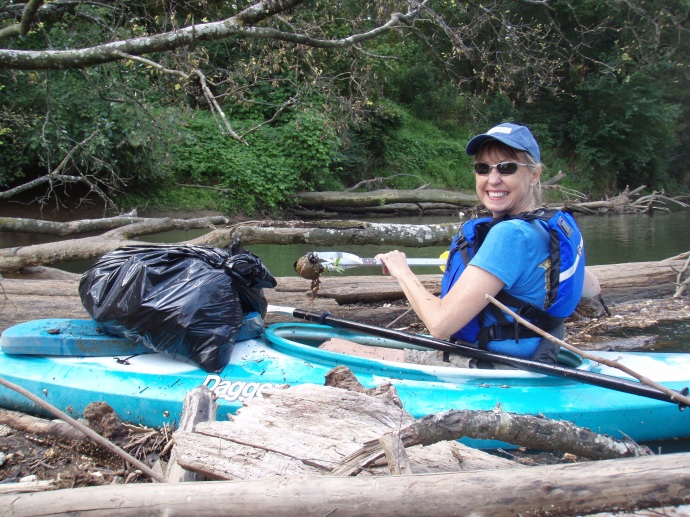 Sally Bethea was the environmental activist and water goddess they chose to head the project, and she has kept the fight going – attracting 4,500 environmental advocate members, bringing the city of Atlanta to court in 1995, and forever changing the habit of urban communities dumping their waste into our waterways. She’s also started a “Get the Dirt Out” campaign to encourage everyday citizens to become Riverwatchers and report polluters, and created multiple education programs that get schoolchildren and adults out on the river so they can learn firsthand the responsibility for and richness of this water abode.

For everything Riverkeeper has done to keep the Chattahoochee clean, I’m giving my $100 today. If you’d rather work than give, you can join one of the many river cleanup projects this Saturday, January 23 in West Atlanta with the neighborhood water alliance (WAWA).

And if you’d just like to be inspired, float away on Raymond Carver’s gorgeous book of poems Where Water Comes Together with Other Water.http://www.amazon.com/s/ref=nb_sb_ss_i_0_17?url=search-alias%3Dstripbooks&field keywords=where+water+comes+together+with+other+water&sprefix=where+water+comes

One thought on “In New York, with Georgia (and the Chattahoochee) on my mind.”