Right now, while the City of New Orleans is celebrating its beloved Jazz Fest, just 40 miles away the sunken Deepwater Horizon oil rig is spewing 9 gallons of sweet crude oil into the Gulf every minute. That amounts to about 200,000 gallons a day from the British Petroleum rig that lies 5,000 feet under the sea and was professed to be “high unlikely” to fail– almost a year to the day before it did.

And all that oil is heading in a thick, viscous, tarry rust-brown mess, 130 miles long and 70 miles wide, directly towards the fragile wetlands that protect the southern Louisiana coast.

Admiral Thad Allen, Commandant of the Coast Guard that has federal oversight over the disaster, calls the situation “catastrophic.” That may prove to be an understatement, because nobody can seem to find a way to stop the oil from gushing out. The remotely controlled blow-out preventers designed to seal off the well apparently didn’t activate.

And so, we’re looking at the worst environmental disaster on record. Of course, the real victims of this disaster won’t be Halliburton (Dick Cheney’s baby) that finished cementing the walls of the rig 20 hours before it exploded; or BP, whose COO for exploration and production claims, “We’ve basically thrown everything we have at it.” 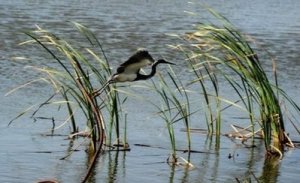 Nope, the real victims will be the millions of birds who are just now converging on the Gulf Coast in migration or to nest in the marsh. And the fish. And the oysters, shrimp and crabs that can’t swim away from the suffocating oil. And the 5,000 dolphins along the Mississippi and Louisiana coasts who are just now in their birthing season. And the loggerhead and Kemp’s Ridley turtles that nest at Bon Secour National Wildlife Refuge, also in the line of the slick. And the fishermen whose livelihoods depend on these waters.

In fact, the entire complex system of freshwater and saltwater wetlands that protect the coast are in peril. For years, those Delta wetlands have been sinking into the ocean, deprived of sustaining sediment by the Mississippi River levees, poisoned by farm runoff, sliced into channels by oil companies seeking a quick way out to the ocean, and cut to ribbons by Hurricanes Katrina and Rita. A thick coating of oil could be the final nail in the coffin, killing the cordgrass that binds the marsh together and destroying the coast’s primary natural barrier to erosion and its vital sanctuary for marine and coastal wildlife. 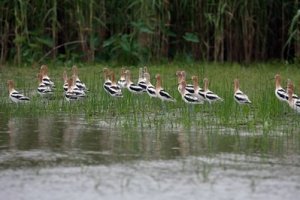 Birds near the mouth of the Mississippi, by Greenpeace.

On March 31, in a stunning and sickening reversal, President Obama announced that areas off the coast from Delaware to central Florida would be opened for oil and natural gas exploration and possible development. Now he’s saying that any new oil rigs will have “safeguards” to prevent something like this from happening. Kind of like the blow-out preventers, Barack??

The fact is, when you drill offshore, disasters are going to happen. And it’s all going to wash up on our shores, until we understand that our need for oil is killing the planet.  My $100 today is going to the non-profit Institute for Marine Mammal Studies in Gulfport, Mississippi where scientists, veterinarians and researchers are working frantically to prepare for the arrival of dying sea mammals covered in America’s favorite cocktail.

You can donate by clicking here . You can also volunteer to go help!