Outside a rural health clinic in Peru.

Guido Nunez-Mujica is one of those crazy-smart young people who look perfectly normal, until you start talking to him and realize his brain works in a way that puts yours to shame. Right now, the 27-year old Venezuelan  computational biologist is attending the 10-week social venture incubator at the Unreasonable Institute in Boulder with 25 other young innovators (see my posts from March 1-12) who have the audacity, energy and brilliance to seriously change the world.

The project Nunez is perfecting at the Institute is the Lava Amp, an ultra-affordable device that will bring PCR (polymerase chain reaction), the most important technique in molecular biology, to the developing world to provide DNA testing that will diagnose neglected and pandemic diseases quickly, cheaply, and portably.

I can’t tell you exactly how the Lava Amp works because I’ve exhausted my grasp of biotech with the word “polymerase,” but I can tell you that this little device has the potential to impact health care delivery across the developing world. How? Well, in Latin America alone, 15 million people suffer from chagas disease. Ever heard of it? Me neither. But chagas and other neglected tropical diseases afflict millions of the poor in the Global South, Africa and Asia. These diseases – and other pandemics-  can blind, deform and debilitate people if they are not detected and treated early enough. But because it has been too expensive to detect them diagnostically, in far-flung rural communities that are often miles from a hospital, these treatable ailments have crippled these already-impoverished communities.

Miles from nowhere - and the nearest health clinic.

The traditional diagnostic DNA testing equipment for infectious diseases weighs about 15 pounds and costs over $3,000. The rugged, inexpensive thermal cycler that Nunez calls Lava Amp weighs less than half a pound, costs under $300, and fits in the palm of your hand. It doesn’t diagnose one specific disease, it’s a hardware platform that can be used to detect many different conditions in blood, saliva, urine or sputum. And it gets results fast. In the case of tuberculosis, for instance, Lava Amp delivers results in 3 hours, as opposed to the sampling and culture tests that currently take 2 months.

Nunez sees the potential for Lava Amp to give local governments and international agencies access to cheap, accurate and reliable information about the spread and incidence of disease so they can plan and deploy an effective, rational response, and get in front of emerging pandemics.  He also sees its potential to revolutionize education in molecular biology in developing countries and enable the next generation of scientists to develop their own diagnostic tests and build local capacity. 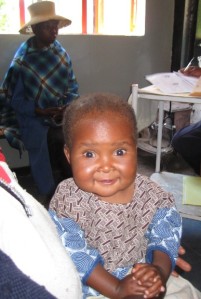 The ultimate promise is that Lava Amp will bring a high level of preventative medicine to the world’s poorest people and help to eradicate the neglected diseases that besiege them. It’s a big task for a small device, but what tremendous promise!

To find out how you can support Lava Amp, click here