Steve Scholl was the first person to give me a job as a writer. I’m not sure if that’s something to commend or blame him for – but it pretty much saved my life back in 1975. I was living in Dillon, Colorado in the sleazy Red Buffalo Motel, working as a daytime cocktail waitress and slowly losing my mind, when I met Steve skiing at A-Basin on the 4th of July–and yes, there was still snow and obviously, plenty of beer. When he asked me what I did, for some reason I said, “I’m a writer” (my first public coming out!) and he said, “Oh, I just lost my editor. Do you want to come work for me?”

And that’s how I became the editor of The Mountain Guide –one of the most underpaid (I think I made $5,000/year), hilariously entertaining, preposterously loosey-goosey, and utterly enriching first jobs any writer could ask for. Steve was the publisher of the paper/magazine, and because he had the most extraordinary sense of humor, we had a wild cast of characters on board (Lee, Hank, Faye, Monie & Sam). For three years, I slept on Steve & Lee’s sofa in the Holiday Inn condos, because I was commuting/hitchhiking up to work from Denver where I lived with my boyfriend Eddie Pizzuti. It was bohemian, it was ridiculous, it was fantastic fun. 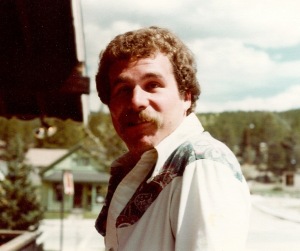 We called Steve “Captain Glacier” because he never exactly had a fire in his belly to get things done, but in retrospect, I think that was a supremely accurate term – because so much of what was wonderful and amazing about him was beneath the surface. Steve really only cared about people. He lived in the moment, he knew how to have fun and lots of it, and he was a totally chill guy – he didn’t sweat the small stuff, he didn’t even sweat the big stuff, like the fact we could never, ever pay our bills. He’d just go out, find some dumb hat to put on, buy some tequila, and come back and start a party. And the weird thing was, he was right –something always did come through to save us. 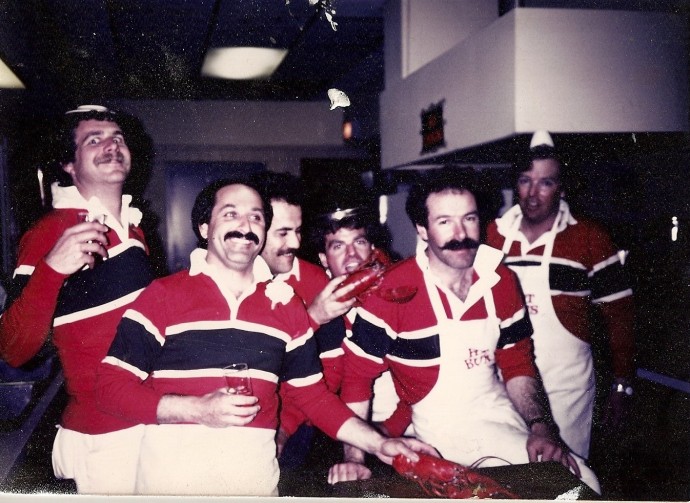 Steve (on left) at Lee's wedding, in the kitchen of course.

As good a salesman as he was, Steve didn’t give a rat’s ass about status or money or people of influence. He liked who he liked and he was ferociously loyal – if you were a friend of his, you were his friend for life. After the Mountain Guide finally went down in flames and we all had to (kinda) grow up, Steve went on to have a happy domestic life – marrying Diane, having his wonderful son Eric, and being a stay-at-home dad—and he didn’t worry about the male ego thing of that, either. He loved to cook, he loved teaching all the boys in the neighborhood how to ride bikes, ride skateboards, and hit a baseball. And he showed up at the important events in his friends’ lives – at my first wedding, my first divorce, my first housewarming, my first book signing.

So how sickeningly ironic that Steve would be diagnosed with Younger Onset Alzheimer’s at age 58, on his and Diane’s 15th anniversary. He died (as most YO patients do) about four years later on October 2, 2008 – when Eric was just 15 – but as Diane told me, he never forgot who they were. Amazingly, he never forgot who any of his friends were, right to the very end.

So today, when people are singing, “Should old acquaintance be forgot, and never brought to mind?” I’m going to be thinking about my good friend Steve Scholl – who never forgot anybody – and who first believed that I could be a writer.

In Steve’s honor, my $100 today goes to AWARE an all-volunteer auxiliary of the Alzheimer’s Association Colorado Chapter which raises funds exclusively for research to find a cure for this disease which afflicts 5.3 million Americans – 500,000 of them younger onset like Steve. Click here to join me in remembering all of them on this day of Auld Lang Syne.

Speaking of which — today is my last day of blogging for What Gives 365. Thanks to all my readers—especially those faithful ones (you know who you are) who somehow managed to read every post, write me comments, and cheer me on every day of the year.

Thanks also to the people, causes and organizations that inspired me every single day to tell their amazing stories of kindness, compassion and love in action.

And a big shout-out to my darling husband whom I pretty much abandoned, as I stayed up on the third floor, hour after hour, doing my obsessive writing, researching and interviewing.

Finally – jeez, I feel like Miss America! –you can catch me on CNN tomorrow morning at 10 am! My final stab of glory!!

A final note:  I’m not taking down the blog – I’ll probably keep writing randomly and who knows? I may even keep giving money away….