I’m leaving in THREE HOURS for Rome, and even though I won’t have my scooter over there, I will be getting to see my darling daughter – who’s spending a semester in the Eternal City … yay!!! We’ll also be spending A Weekend in Tuscany at my sister-in-law’s villa, which is meant to be fabulous –so I couldn’t be any more excited. 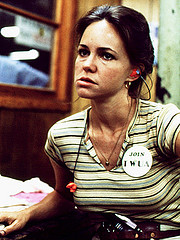 Except now I really DO feel like Nero a bit, considering what is going on in Wisconsin. Governor Scott Walker, finger puppet of the Koch Brothers, has apparently decided to set the stage for another Norma Ray film, by trying to strip collective bargaining rights from the state’s public workers. At first he cloaked his union-busting intentions by demanding concessions from the public workers to finance health care and pension plans – which the workers agreed to, cutting their take-home pay by 8 to 10%. He asked the workers to “share the pain” of a billion dollar shortfall – but somehow asked for “no pain, just capital gains” from the richest people in his state.

If I’m not mistaken (and I’m not) when President Obama suggested that the wealthiest 5% of Americans “share the pain” and begin paying their fair share of taxes, Republicans screamed that he was instigating class warfare .. and a socialist state. Now when Republicans talk about “sharing the pain,” it’s code for “wear the pain, middle class schmucks.” It makes me sick to think that teachers making an average $51,000 a year are taking a 8% paycut – and people like me get to traipse off to Rome without being asked to contribute an extra dime. I’m ashamed at this iniquity.

Governor Walker was true to the Koch’s Real Thing in his budget presented last night: no new taxes or fee increases, an end to public workers’ collective bargaining rights, an 8% (1.5 billion) cut in aid to local schools and governments, and a call to restrict any property tax increases.

In other words, Governor Walker is going to balance the budget by sticking it to public workers without asking a single thing of the wealthiest Wisconsin citizens. That sucks – and because four of my seven siblings and two of my stepchildren are teachers and public workers, I have to tell you, if I were in Madison, I would be picketing like crazy.