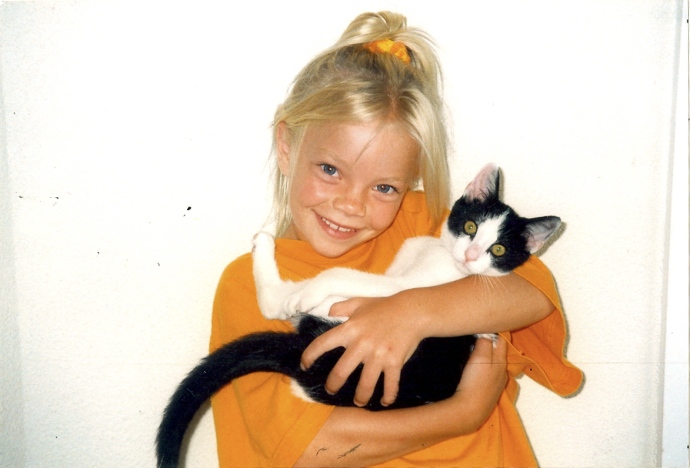 My cat is missing.

We’ve had Domino since my husband found him abandoned in a dorm on Swarthmore’s campus 14 years ago, and he’s been a great cat for our family. He’s declawed but loves the outdoors so much, we never had the heart to keep him indoors. Luckily he’s big enough to take care of himself — black and white (hence the not-so-creative name) and ridiculously friendly. When we have cocktail parties at the house, Domino will stroll in the front door, stand in the middle of a circle of talking adults, and systematically work his way around 360 degrees, rubbing his head against every person’s shoes in an ecstasy of contentment.

Domino has a habit of lying in the driveway, waiting for us to come home – and the minute we drive up, he’ll stand up, stretch languidly, then dramatically fall on his side and wait to be petted. I’m not exactly an animal person, but that’s one trick it’s impossible not to fall for. There is no way he would wander off, away from the food and love source, so all I can think is that a coyote got him, he went away to die, or that something awful happened.

But I didn’t hear a sound the night he disappeared. I’ve got a mother’s ridiculous aural acuity, and anytime I’d hear the yowls and hissing of a nocturnal cat fight, I’d fly down the stairs in the dark, half-naked, and go running to his rescue, chasing off the other cat with ferocious swears. But there was no noise this time.

On the road back to college...

Now I’m on my way up to New York, driving Lulu back to college, and I’m heartbroken to think he’s gone. Lulu grew up with Domino and loves him to pieces, so I can barely bring myself to tell her he’s missing.

Sleeping through the quake.

I hate these changes. It’s so sad to see your children grow up and fly away; it’s a hole in your heart to lose a sweet pet; and as my husband’s dad loses his grip at age 93, it’s yet another loss to be shouldered and borne. Today it feels awfully heavy.

On the happier side – we drove right through northern Virginia yesterday as the quake hit…and felt nothing! And Young World Inventors (see last post) made their Kickstarter goal and will get all their funding!

And it’s beautiful, sunny and cool in Philadelphia… so life goes on.