All photos courtesy of the Carter Center

Yesterday, President Jimmy Carter came to Oglethorpe University as part of the college’s Rikard Lecture Series. The theatre was packed to capacity, the president was introduced by his grandson Josh (married to Sarah, an OU alum) and the talk was both casual and compelling. At 85, Carter is still jetting around the globe campaigning for peace, writing books, waging war against disease, advocating for democracy and farming peanuts. Seriously, the guy is incredible – and so is his wife, Rosalynn, a tireless champion for mental health.

Co-founded by former President Jimmy Carter and former First Lady Rosalynn Carter in 1982, the Carter Center sits on 35 beautiful acres just east of downtown Atlanta. Actively led by the Carters, the Center’s work is best summarized by its motto “waging peace, fighting disease, building hope,” with a culture that springs directly from those words.  This is not an organization afraid of straight talk.  Peace is something to be waged and disease won’t go down without a fight. 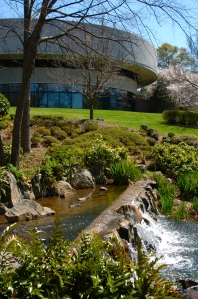 The Carter Center is guided by five simple principles, two of which I experienced every day on the job.  The first is: “The Center does not duplicate the effective efforts of others.”  I once asked my supervisor “Why spend four years mediating conflict in Nepal instead of doubling the resources in Sudan?”  He gently reminded me that much of what I’d heard about Sudan was reports of good work being done by other organizations.  Nepal’s troubles were a small ripple in the 24-hour news cycle, but the Center had made a huge difference in mediating the Nepal conflict and observing a peaceful election in 2008.

The other guiding principle that I found particularly inspiring is “The Center believes that people can improve their lives when provided with the necessary skills, knowledge, and access to resources.”  This may sound basic, but it communicates the sense of respect with which the Center approaches its work in some of the most neglected regions of the world. They are there to work with people to solve problems, not air-drop ‘solutions’ developed in a Western country. I once asked a fellow intern in the Health Programs, “Why focus on eradicating the “forgotten disease” guinea worm instead of fighting AIDS?”   She explained that precisely because it was a “forgotten disease,” guinea worm perfectly fit the first principle, but the procedure for eradicating guinea worm also aligned with the fifth principle. (Watch this video only if you have a strong stomach)

Guinea worm is a parasite that only lives in humans, so the Carter Center worked with over 200,000 villages to alter traditional behaviors and teach people water filtration techniques that prevent transmission. This respectful approach, over the course of 25 long years, achieved monumental success. When the Center began work in 1986, there were an estimated 3.5 million cases of guinea worm in 20 countries. The incidence of disease is now down to an estimated 3,000 cases in only 4 countries. After wreaking havoc on humans since biblical times, guinea worm will soon become the second eradicated disease in history (after smallpox).  That historical event could easily happen this year. So three cheers for Betty’s 2010 donation to fight guinea worm! May it be one of the last!