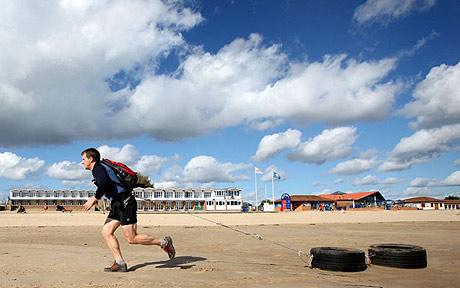 Chris Foot in training (photo by Clara Molden for the Telegraph).

To say the British are eccentric is a wild understatement. Behind that stiff-upper-lip, proper-English-tea exterior lies a madcap wit, a piercing intelligence, and a ferocious toughness of spirit. And nobody exemplifies that better than Chris Foot, the 32-year old former Royal Marine who will be hauling a 70-pound sled across 1,400 miles of arctic wilderness in -80 degree temperatures that just may crack his teeth and blacken his toes. This November, Foot is attempting the last remaining challenge in Antarctica – to walk, unsupported and alone, from Hercules Inlet to the South Pole. And back. 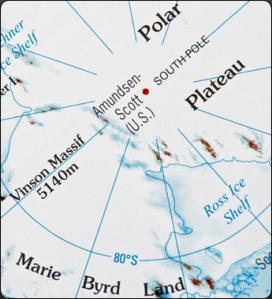 Where are all the roads?

In over 100 years, this trek has never been achieved without dogs or ski-kites– much less solo– but apparently British pride is at stake here, and that means a lot. In 1911, just as British naval officer Robert Falcon Scott was approaching the South Pole “he was pipped at the post by the Norwegian, Roald Amundsen,” says fellow expeditionist and Foot’s trainer and polar consultant, Conrad Dickinson. “This is an opportunity to redress the balance…a great British victory, a jewel in the crown.”

Oh, well – now I get it. No wonder Foot wants to haul all his food and supplies into the pitiless frozen wilderness where he will spend 75 days fighting 175 mph winds, hellacious crevasses, and utter loneliness. Every six days, he will drop rations at a cache and mark it with a bamboo stick (sounds a little sketchy) to lighten his load and provide food for the return journey. Day by day, his body will deteriorate; even his 7000 calorie-a-day-diet (my dream) won’t be enough to sustain the equivalent of  pulling a cast-iron bath full of water 700 miles to the pole, and 700 miles back. Foot’s not even taking the shortest route, and he’s doing it the hardest possible way – without dogs (Amundsen) or ski-kiting his way back (Dickinson). A tracker beacon and satellite phone will be his only safety net.

But then, Chris Foot likes a challenge. At 21, he became the youngest serving member of the elite Special Air Service (SAS), served in both Iraq and Afghanistan, and developed a love for ice climbing, mountaineering, cold weather regions, and let’s face it, extreme hardship. He now runs 4Ward Motion, a company teaching leadership skills and the Sports Mind Training that he obviously excels in.

But Foot also has a big heart – he’s donating all the proceeds of his Extreme Endeavor polar expedition to the Combat Stress Enemy Within Appeal, to help his mates in the military. In March, 2010, HRH Prince Charles launched the Appeal to provide free care to an ever-increasing number of returning veterans who are suffering psychological damage from their  traumatic war experiences –and once again, Chris Foot has stepped up to help.

It’s the British thing to do. So today I’m donating $100 to the Appeal and Chris Foot’s Extreme Endeavor – and I’ll be waiting breathlessly until he makes it safely back! Click here to lend Chris Foot a hand!