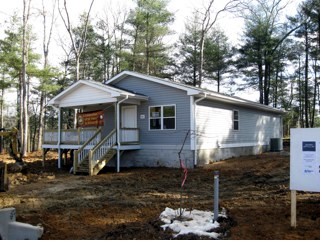 Last year, in October, Peter Grant, the head of Habitat for Humanity in Henderson, North Carolina www.habitat-hvl.org, got a request from Mud Creek Baptist Church, one of the largest Baptist churches in Hendersonville. Their building mission, Carpenter’s Hands, was celebrating its 10th anniversary and wanted to build a house for a family … in 5 days, from December 26- 31. That’s an incredible undertaking, requiring intense coordination of materials, people, and inspections, but the Baptists were really well organized and passionate about the cause, so Peter agreed, even though he was going to be in Southeast Asia at the time. Habitat had just approved the Pheuns, a Cambodian family with 9 children, and Mud Creek knew they had their project.

Habitat’s family selection process is rigorous. A family must be of median household income (in this case over $18,000 and under $40,000), legal, working, living in very poor conditions, willing to contribute many hours of work to building the house, and committed to paying back a no-interest mortgage to Habitat. Only 1 in 6 families that apply will be selected for a home.

On December 26, despite snow rain, cold and deep viscous mud, 100 people from Mud Creek showed up to raise the walls of the Pheuns 5-bedroom house (they’d prebuilt walls in the warehouse and the foundation and floor work had been completed). On day two, trade folks went to work and completed electrical, plumbing and HVAC, with inspectors standing by to okay the work. Day three, teams hung dry wall and started finishing and trim jobs. Day four carpeting and flooring went in, cabinet makers built and installed doors and cabinets, painters painted, and lighting fixtures and appliances were installed. Day five, vinyl siding went up, and final touch-ups and inspections were completed. In the meantime, other Mud Creek folks were buying furniture and Christmas trees, linens and artwork to make the house look like a real home.

On December 31, Peter Grant got back in town and checked in; he literally could not believe the progress – or the spirit and enthusiasm (never underestimate the power of some fired-up Baptists!) At the house dedication on January 2, hundreds of townspeople who’d heard about the project showed up to celebrate. Having just returned from Cambodia on his trip, Peter gave the Pheuns a traditional Cambodian greeting in their language. Stunned, the older adults clustered around him asking, “How do you know our country? How do you know our greeting?” When Peter explained he’d just been in Phnom Phen, their first question was, “Did you go to the killing fields? Did you visit S21 Prison?” When he said he had, the elders broke down in tears and told their story of having fled the city, walking for days to escape the Khmer Rouge, and suffering four years of oppression before coming as refugees to America. (1.5 million Cambodians were estimated to have been killed during the brutal regime.)

It was an amazing ending to an amazing journey—a homecoming like no other. My $100 today goes to the Henderson County Habitat for Humanity, which is currently building some 80 more homes for deserving families.