I love the 4th of July. It’s one of the few holidays (like Thanksgiving) where all you’re required to do is eat. No presents to buy, no cards to send. Just show up for fireworks, hot dogs and sweet tea.

However, under the influence of this year’s project, I find myself compelled to make some deeper connection with the Fourth than through my stomach. So today I’m honoring the USO, an organization whose only mission is to improve the morale of U.S. servicemen and women around the world. And who can’t get behind that?

Frankly, I can’t even begin to imagine what it must be like to be serving in Iraq or Afghanistan –our longest wars in American history—much less have a child or husband or sister over there. My heart goes out to everyone who chooses to serve—and their families –but talk is cheap. Writing is better.

So here’s one easy, meaningful and important thing you can do to express your gratitude to Americans who are in uniform this Fourth. If you click here, you can jot down an Independence Day greeting and USO will share it with our soldiers deployed overseas. It’s one thing we can do in under two minutes to let our voluntary military troops know that, amidst the potato salad and sparklers, we are thinking of them and thankful for their service. 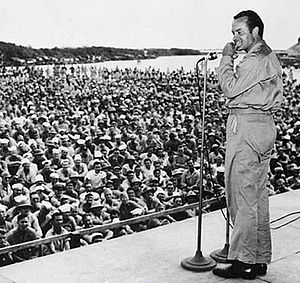 Bob Hope, who performed in more USO shows than anyone

The USO has been there, as “a home away from home” for U.S. troops since 1941. Wherever Americans have gone to serve, the USO has gone, too. They’ve put on close to 500,000 performances over the years for homesick soldiers, with celebrities ranging from Marilyn Monroe and Bob Hope to Carrie Underwood and Stephen Colbert, who memorably shaved his head last year while visiting Iraq. They’ve assembled a total of more than 1.5 million care packages for troops deployed overseas, and kept up with modern times, dispensing 2 million USO Phone Home international calling cards to troops in Iraq and Afghanistan

For all USO does –from dishing up entertainment, to the rousing welcome some of its 44,000 volunteers give to the 3,000 returning troops passing through the Atlanta & Dallas airports every day, I’m saluting the USO and sending them my $100 donation.

Have a Happy 4th – don’t eat too much BBQ, and don’t forget to write… “Until every one comes home.”