The only downside to Uganda is that it was almost impossible to blog from there. So, here is what I wrote along the way:

What a way to wake up! To this view…

And to people throughout the Nyaka AIDS Orphans School greeting me, “You are welcome here, Bet-ty!” They even say my name in a lilting, polished way– instead of the customary American “Beddy”rendition. 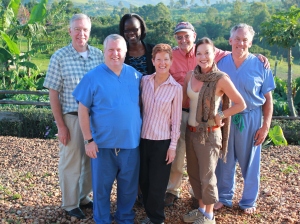 So far, I’m pretty much in love with Uganda– and our group of volunteers. I’m sharing a room with Jennifer Nantale, the Country Director of Nyaka, who looks like Michelle Obama and is every bit as poised and competent. Yesterday, Jennifer, me, Tom Kelly & Paul DeWeese (two laid-back and excellent doctors from Michigan), John Brewster (a retired, service-loving dentist from Michigan), Melissa Merritt (Paul’s lovely nurse and her son Austin), Terry Erickson (a dental technician and volunteer extraordinaire from Portland, Oregon) and her husband Roger all crammed in two vans and made the 10-hour, bone-jarring ride from Entebbe across the equator and down to Nyaka — the last two hours on unpaved roads, bouncing up and down a 70-degree ravine.

We learned a lot of interesting facts when we stopped at the Equator Cafe for lunch, and even got a demo of the bizarre scientific habit of water swirling down a drain clockwise in the Northern hemisphere and then, just a few feet away, swirling counter-clockwise in the South. So, who knows what happens directly ON the equator?? (It sucks straight down in an ecstasy of magnetic gravity.)

As we traveled further from the capital, the towns got poorer and the squalor a bit more desperate. The countryside is a riot of green, with banana palms as far as you can see and lush fields dotted with cattle and goats. But the towns are generally one straight line of corrugated mud & tin huts painted in the bright colors of the local cell phone vendors, with big-eyed children peering out from the dark, smoky interiors and mothers clad in bright cloth bent over scrubbing clothes in a pot. This is the face of poverty, and yet somehow, the people don’t seem broken by it – they smile, they wave, or they stare at you with remote, dignified hauteur.

We stopped in the last big town before Nyaka so the doctors could stock up on meds at the pharmacy, the hydrators in the group could get gallons of water, and I could get cash. Which was a lot more difficult than you might think (well, you undoubtedly would have been thinking a lot more clearly than me, since I am the only dope who didn’t change money at the airport). Seven surly cash machines in a row refused my Visa card (clearly NOT “accepted everywhere you want to be”…) until our trusty guide Sam headed me to the one bank in town whose ATM worked for me, and then I felt filthy rich @2700 Ugandan shillings per dollar. Or at least rich (and ludicrously optimistic) enough to buy a mobile modem for my computer. 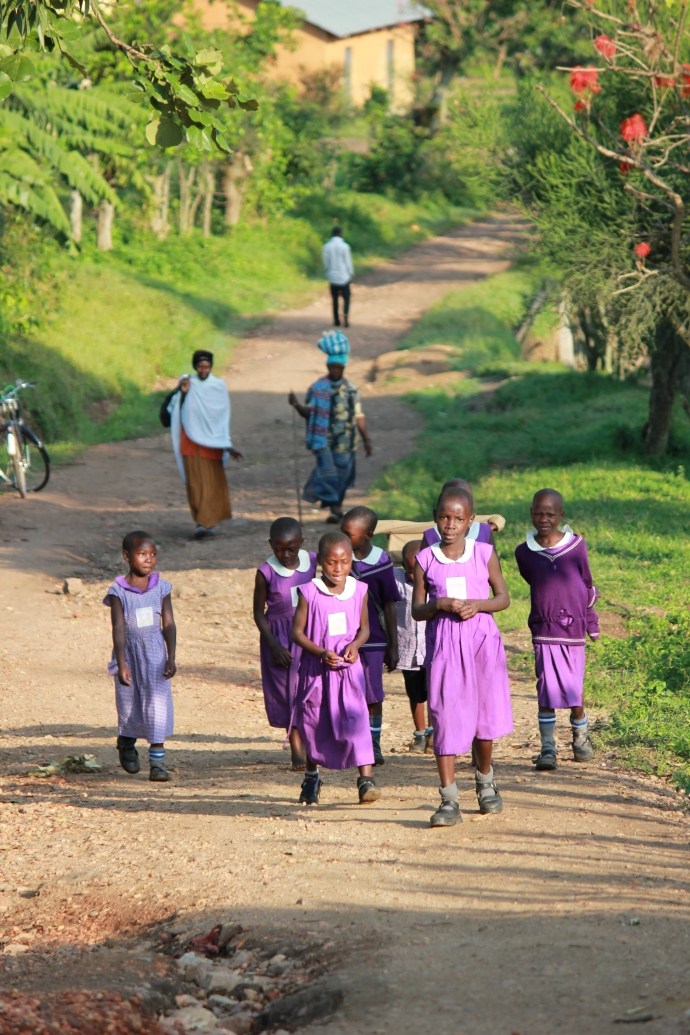 We arrived just at dark, got settled into our rooms in Nyaka’s sweet guest house, and had a delicious dinner prepared by Jackson’s sister Faida. I braved a cold shower to wash the dust of the road off me, and jumped into bed — only to wake up at 7 am to the sounds of children and the smell of Nescafe. I was so excited to see the children, all of whom had walked to school from as far as 5 miles away, that I raced through breakfast and ran outside to start my one-woman PR campaign — waving, grinning like a madwoman, and shooting photos like there was no tomorrow. Thank god for digital … otherwise I would have burned through all my film by now.

The Nyaka school day begins with a beautiful assembly, with drums, singing, prayer, two news updates, admonitions, and good luck prayers for the 7th graders, who are taking the national test next week to see if they will be admitted to secondary school. What a lot of pressure! They surely feel the weight of all that is riding on that performance: their own academic future, the hopes and aspirations of their teachers, the reputation of the school and their Director, and the financial support of Nyaka donors. So far, Nyaka School has a 100% pass rate on the exams — which is markedly better than the national average, so they have that to live up to as well. It makes me nervous for them!

Breathe in, breathe out ... gym class at Nyaka.

But the kids in all the grades at Nyaka are first and foremost kids — running, screaming, jumping with joy, playing soccer, bouncing around outdoors, and smiling those bright, gorgeous smiles. They are thin, but they seem healthy and what’s more, they seem happy — in this pretty school in this verdant green country that seems so peaceful but has seen so much tragedy, conflict and loss. It makes me wonder why we in America, with all our overabundance, have so much anger, discontent and unending anxiety.

I thought I was coming to help these children who have lost at least one parent to AIDS get an education. Then why do I feel that it’s me who has so much to learn?

Nyaka is participating in the first ever Nike Girl Effect Challenge to win a portion of the funding from the Nike Foundation for the next year. They have $33,000 left to raise in 4 days… click here to help!