Not my photo — but look how pretty!

Totally by accident, I became one of the first Americans to fly on the brand new Boeing Dreamliner .. not in its inaugural United Airlines flight from Houston to Narita, Japan; but on October 26, on Ethiopian Airlines from Dulles to Addis Ababa in Economy, Row 28A.

Ethiopian Airlines got the Dreamliner about 6 weeks before United and not to be a big, fat complainer (wouldn’t be the first time)  but I have a few issues with this plane.

From the front it just looks cozy…

For one thing, my seat was an exit row and claustrophobic in the extreme. The window was partially blocked unless you reclined your seat to its maximum pitch (which made the person behind me so mad, she kept whacking my seat with her feet);  and the personal screen that swings up from under the seat was half the size of the screens on the regular seatbacks. (Actually, that wasn’t an issue since Ethiopian Air was playing the exact same lineup of movies and TV shows that I saw during my 28 hours in flight three months ago — and five months ago.)

But more to the point – let’s go to the bathrooms. Because I was sitting directly in front of one (thanks, seating agents) I had plenty of time to witness exactly how non-functional they are. 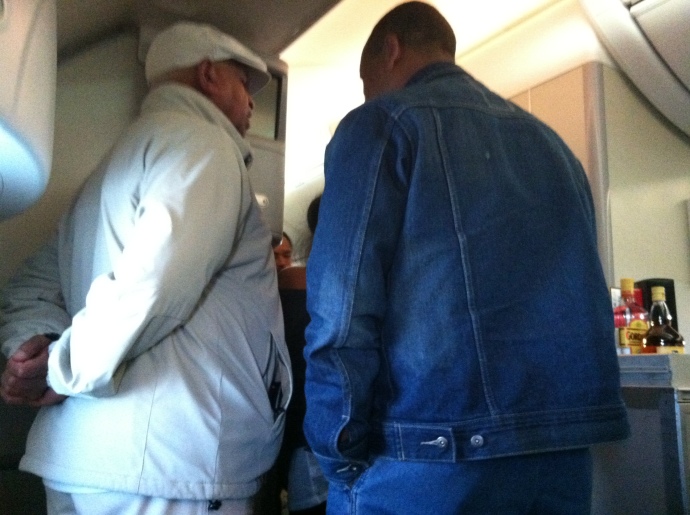 My view (bathroom is behind the guys).

Instead of just opening on its hinges, the bathroom door swings diagonally on a center axis. Nobody seemed to be capable of understanding how to work this, or more importantly how to lock it, so I watched 4 people (in an hour) get surprised by a hapless intruder. (There’s also no “in use” light that I could see.)

Inside the spacious commode (and it is bigger than traditional airline bathrooms), a space under the incredibly flimsy sink was already being held together by duct tape (the plane is 6 weeks old). There was no soap dispenser in the bathroom, merely a cheap plastic holder. I didn’t see any dispenser for hand towels either, so throughout the 14-hour flight I was wiping my hands on shredding Kleenex.

The toilet-paper holder consisted of two tiny white plaster triangles that failed to hold the toilet paper holder in place after the first 30 minutes of the flight – and more importantly, would only hold a small roll. Not the best idea for a 14-hour flight, as both rolls ran out somewhere above Tunisia. And because people misunderstood the purpose of the gap below the sink, they started shoving trash in it, forcing it open like a gaping mouth.

Worse still, the toilet lid in the front bathroom was bizarrely situated so it couldn’t be propped fully open (the overhanging changing table prevented this). So the minute you let it go, it automatically closed and flushed. (This was the only way it would flush.) For a woman, this meant that you had to prop open the seat top, then whirl around and plop yourself down in order to get your butt on the seat without the lid closing beneath you. I have no idea what guys were doing but I’m assuming they had to hold the top up with one hand while doing their business with the other. Generally speaking, this tricky procedure meant passengers averaged at least 3 trial flushes per visit, (it’s an automatic and very vigorous, noisy flush), so I’m assuming nobody was quite getting the optimal Dreamliner bathroom experience, although I’m not sure what that experience was designed to be.

Nothing annoys me more than fixing a problem that doesn’t exist – like voter fraud or flushing a bathroom toilet. Everybody has been pretty well trained to use the handle or push the FLUSH button – and if they haven’t, it’s not exactly rocket science to decipher the flush icon. But apparently the geniuses at Boeing believe the better way to flush is to make it automatic when the seat closes.  In the back economy bathroom, where you had to physically close the lid to flush, almost no one could figure that out … and so nobody flushed. They also doubled their time in the bathroom trying to figure out how to get the stupid toilet to do what it’s supposed to.

But the view was beautiful from the tinted windows — and look at that pretty wing!

Seriously, why couldn’t Boeing concentrate on problems that really DO exist – like how to keep a toilet paper roll in place and giving exit row dwellers a place to put their stuff .. and their feet. That’s kind of essential on a long flight. The Dreamliner also does away with the cabin where the crew goes to take a nap on long flights, so the last four rows were cordoned off so they could lie down and sleep, making 40 seats non-revenue fares. But maybe Boeing was just concentrating on making everything as light as possible to improve the fuel efficiency of this new plane. Or maybe they just gave Ethiopian Airlines the half-done model, which would be kind of crummy.

So how would I vote on this new Dreamliner? The fresh, moist air was welcome and I didn’t feel as jet-lagged as usual the next day .. so that was dreamy. But all in all — I wouldn’t give it a big thumbs-up, although I always love to fly!

* p.s. Sorry about the “nighmarish” typo in the headline … I posted this at 2:30 am in Dubai so needless to say, I was delirious with fatigue.

8 thoughts on “A few nightmarish qualities of the new Dreamliner.”