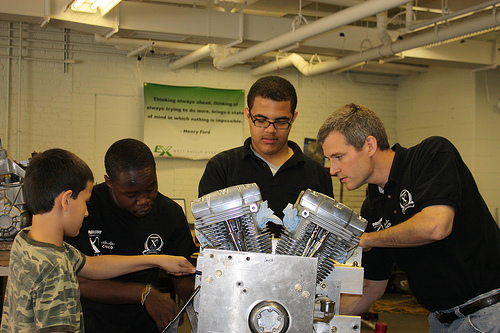 I love an underdog. But the kids of the Academy of Automotive and Mechanical Engineering at West Philadelphia High School are such rock stars, it’s impossible to think of them as “under” anything (except the hood of their phenomenal hybrid cars). In fact, with their teacher/mentor/guru Simon Hauger, they’re just over-the-top awesome in every way.

Girls can be gearheads, too.

Consider the facts. West Philadephia High is a public school serving one of the most disadvantaged neighborhoods in the city. Yet for 11 years, the West Philly Hybrid X Team (EVX), an innovative after-school program has been developing, building and racing alternative fuel vehicles and winning on a regional and national level, including the 2002, 2005 and 2006 national Tour de Sol. But this year, EVX has its eyes on the big prize.

The Progressive Insurance Automotive X Prize is a $10 million international competition to build the best cars that get over 100 mpg: with $5 million awarded to the best four-door economy car, and $2.5 million each to two winners in the two-seater category. 111 international teams started – well-heeled competitors from prestigious universities like MIT, automotive manufacturers, venture capitalists and engineering firms – plus one ragtag bunch of teenagers from an underfunded afterschool high school program in West Philly. 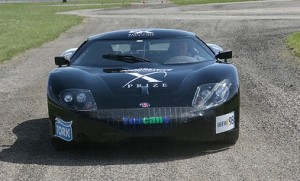 The high-performance EVX GT- up for $2.5 million award!

However … big fanfare please… after almost three years’ work, EVX is one of just 22 teams left in the running, having beaten out MIT and teams with 100 times their budget. In fact, EVX still has two cars in the race: a Ford Focus parallel plug-in hybrid that can go from 0 to 60 in less than 9 seconds; and a diesel electric GT that will go 150+ mph, and from 0 to 60 in under 5 seconds – at 60% the cost of a Tesla. On the road to the prize, two hurdles remain: a 10-day road test at the Michigan International Speedway later this month, and a final competition in July. Then in September, the million-dollar winners will be announced.

“The team that knows no ceiling” – as EVX is famously called – is fully confident that their cars will take home the big prize. But it’s hard to argue with 14-year gifted teacher, sustainability scion and academic EVX founder Simon Hauger when he contends that his kids have already won in all the most important ways.

They’ve taken on some of the biggest issues of our day: how to build cars that consume less oil, improve air quality, and create good manufacturing jobs in the U.S. – and thought their way through to creative, viable solutions. Equally important, EVX has utterly changed the odds for these kids’ personal futures: 90% of team members graduate (while the rate of the public schools hover around 50%) and almost 75% go into post-secondary education programs. In short, EVX is proof that urban kids with big disadvantages can perform at the highest level and when given the opportunity can demonstrate their true potential.

This group of amazing kids from North Philly, Trinidad, Senegal, Bangladesh, China and Newark are going places – heck, they’ve already arrived – and it’s such a joy to be along for the ride!

To listen to a great interview with Simon Hauger and Co-Captain Azeem Hill click here:

To support a winning team that could really use your help, click here