A few months ago, I got an email from Alex Cieminski in Oregon. He had a suggestion for my vicarious giving: the Little Flower School in India. Little Flower is run by Ramesh Mathu, a college-eduated biochemist whom Alex met in Tiruvannamalai, a bustling but little known destination for spiritual seekers in India, near Arunachala, one of southern India’s five holy places. Ramesh was managing the guesthouse Alex was living in, as well as running a school to educate village children from the poorest of the poor.

Children can go to school for free in India, but they must pay for books, uniforms and fees, which prohibits many of the people making less than $1/day from giving their children an education. When Ramesh realized the village children weren’t going to school, he began teaching one small boy, Ramu, how to read and write. Quickly the word spread, and day by day, more and more children congregated around Ramesh, trying to get into his “school,” held outside morning and night –until finally, Ramesh rented a building (for $10/month) where he and two other teachers now hold classes for the children.

Ramesh and two of his pupils.

Ramesh and I have been communicating and he has sent me numerous reports on his school, including the Little Flower official charter. He and the other two teachers are giving the children lessons in Tamil, English and basic science. When possible, he offers the children a meal, but he is struggling to raise funds for notebooks, pens, chairs and tables. He calls the school “Little Flower” because the village children earn money by taking flowers to the homes of rich people and begging for a few rupees. 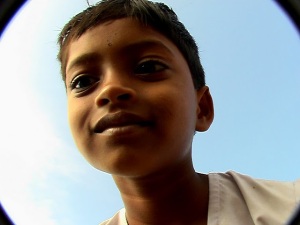 As much as I hesitate to send money to a place that doesn’t even have a proper website, I also realize this is probably exactly where my $100 will make the most significant impact. Alex supports the school himself and has told about Ramesh’s deep commitment to helping these children get the education they crave. Plus, Ramesh always sends me beautifully formal and polite emails that are invariably signed: Love, Ramesh.

When I look at the hopeful, joyful faces of these children, and think of how desperately they want an education — and then consider that a man with a college education who could be taking another path to success is striving so valiantly to teach them — well, that whole package is pretty much irresistible. To join me in donating to support Little Flowers click here for Ramesh’s address.

(All photos are from Little Flower School by Nataraaj.)