What if there was a way to decrease greenhouse gas emissions while producing fuel while creating better soil for farmers? Would you be down with that? (Come on, Sarah, even you would!)

Well, 2,500 years ago in the Amazon, pre-Columbian people discovered that if they burned wood and animal waste without oxygen, it would turn into a solid form of carbon that dramatically improved the soil’s water retention and productivity. Deposits of that solid carbon can still be found in the Amazon, making it some of the most fertile soil in the world.

Today, a brilliant young Princeton grad named Jason Aramburu is taking that ancient science and making a dynamic and promising social enterprise out of biochar, as the solid carbon is called. re:char, Aramburu’s venture of scientists and engineers, has produced innovative small-scale and large-scale pyrolyzer kilns that convert biomass into biochar and liquid fuel oil, using ultra-high temperatures in the absence of oxygen. The beauty of these kilns is the environmental trifecta that biochar offers: it sequesters carbon permanently, mitigating greenhouse gases; it uses up biomass waste products, promoting recycling; and it improves degraded soils, reducing the need for water and fertilizers.

Bio-char, tested in the field.

The numbers are downright compelling. There are six billion tons of agricultural and wood waste in the world, fodder for Araburu’s kilns. Biochar can improve the productivity of soil by up to 200%.  The mobile re:char pyrolyzers can be built for about $20-$50, and will provide biochar and heat for cooking for a single farm, so the economics for developing countries look good. And having been tested on three continents, re:char is ready to scale-up on a global level, using biochar to capture 2 billion tons of carbon a year. 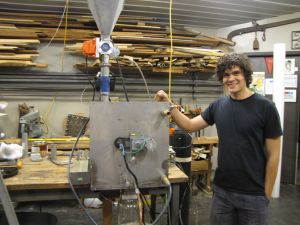 Produced in a standard metal shop with recycled parts!

Although I’m anything but a scientist, even I can see why Business Week named Aramburu one of its 25 most promising social entrepreneurs, Echoing Green just named him a Fellow, and the Unreasonable Institute claimed him as one of its own for its first business incubator, currently in progress. Not only is he scary-smart, Aramburu is also pragmatic and insightful. 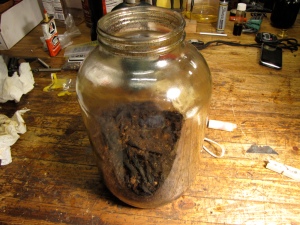 “We’re asking people to change their behavior and that demands some kind of incentive. So as much as we’re promoting biochar technologies, we’re also promoting awareness of and creating a desire for this renewable carbon-negative energy source.”

re:char is a for-profit venture, with a social mission embedded in it, so any donation is not tax-deductible. But to me, that’s a small price to pay to support a business with this kind of potential to impact our planet. Click here if you’d like to join me in cleaning up this place.