Okay, so maybe you’re a tougher person than me. But I can barely even tell the Fugees Family story without choking up. There’s just something so remarkable about the faces of these beautiful kids from all over the world, who have lived through terrible, terrifying things no child should have to see … and yet somehow landed on the soccer fields of Clarkston, Georgia under the fierce, demanding and loving protection of Luma Mufleh.

It’s a remarkable story…and it’s already been told in a book Outcasts United by New York Times writer, Warren St. John, soon to become a movie by Universal Pictures. Five years ago, Coach Luma started a soccer team, to provide refugee boys resettled in Clarkson, Georgia with a place to play, heal, and feel at home in this strange new land. Despite all outside advice, she included anybody who wanted to play and would live up to her strict rules of conduct: Africans and Asians, Northern and Southern Sudanese, Muslims and Christians, Sunni and Shia Muslims – they all play on the same team.

But Luma quickly learned that her involvement with her team was destined to move well beyond the soccer pitch, as she began to help her players with their homework (their parents generally don’t read or speak English) and learn how to succeed in school when many of them had never been in a classroom, didn’t know the language and in fact, couldn’t read. So she did what any normal soccer coach would do – she started a school.

Fugee scholars at the Academy.

And now 27 refugee boys attend the Fugee Academy; 86 boys aged 10-19 are part of the Fugees Family year-round soccer program; each gets after-school tutoring; and 72  are biking every day for six weeks this summer from Clarkston to Agnes Scott College to attend an academic enrichment camp. (“The buses were too expensive and besides, it’s good exercise for all of us,” Luma says cheerfully.) 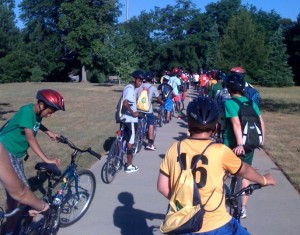 Fugees on the trail to camp

And if you think Coach Luma is stopping there, you might as well drop and give her 10.  In May, she will watch her first Fugee graduate from college (Shamsoun from Sudan), add another grade (9th) to the Fugee Academy, and continue to raise money to build her school on the 19 acres of land she just purchased in Clarkston, for which she raised $650,000 in thirty days. 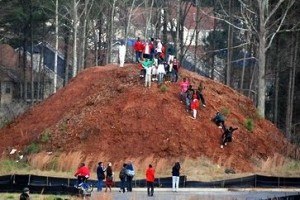 Fugees on the dirt mound that will be their new school.

Spend five minutes with Luma, and you’ll realize that the term, “In for a dime, in for a dollar” was certainly written with her in mind –and the dollar will undoubtedly be yours, because you’ll be dying to give it to her to support the Fugees Family. I stood beside her at camp and watched the boys troop back in after swimming –kids from Nepal and Afghanistan, Liberia and Burundi, Cuba and the Congo, shoulder to shoulder – and the one thing they had in common (besides a good attitude and their yellow Fugees t-shirts) was this one, small Jordanian guardian angel standing in the back. Their Coach.

Coach Luma and her Fugees.