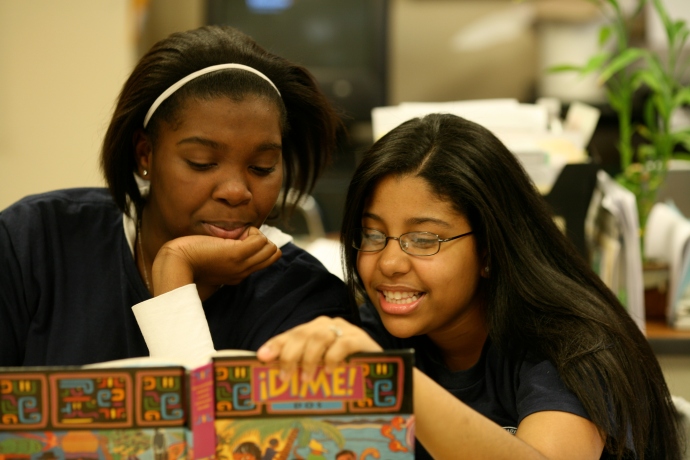 If you’re feeling the need for a ray of hope for the future today, put on your SPF 35 because I’m going to blast you with some sunshine. The Young Women’s Leadership  Schools in East Harlem, Queens, Astoria, Brooklyn and Philadelphia are achieving such incredible results with their all-girl public schools, it’s enough to restore your faith in humanity.

Consider the statistics: 95% of the girls from TYWLS, the vast majority from disadvantaged minority families, are accepted to college and 79% of them will be the first child in their families to go. All TYWLS in New York received an “A” on the Department of Education’s School Progress Report. And the schools have done such a good job of preparing the girls for college that as of 2009, 80% of TYWLS alums are still in college or have graduated – in bright contrast to the 24% of low-income students who attend college nationwide.

How have The Young Women’s Leadership Schools succeeded where so many others have failed? The brainchild of Ann and Andrew Tisch, Young Women’s Leadership Network was founded in 1996 with a mission to offer an excellent college preparatory education to all inner city students regardless of past academic performance but with a willingness to strive academically. The goal was to open single-gender public schools that were small, ran 6th through 12th grade, and focused on leadership development, high expectations and rigorous college preparation – manifested in the College Bound Initiative.

Which college are we going to?

CBI is more than a service of TYWL Schools, it infuses every part of the curriculum. Girls aren’t simply encouraged to go to college, they are expected to, and college exploration begins in the seventh grade. Highly qualified and trained college guidance counselors work individually with the students with the sole responsibility to guide students and parents through the entire admissions, financial aid and enrollment process. While most public schools have a 500-to-1 guidance counselor ratio,  5 TYWLS and 7 co-ed New York City public schools using CBI have a 100-to-1 ratio … meaning students get five times the attention and help from the counselor. It’s paid off big time in the results seen above.

But TYWLS also goes the extra mile — bringing in Cool Women with Hot Jobs (from Estee Lauder, Goldman Sachs and AT&T) to inspire the girls to dream big when it comes to potential career paths. Fundraising allows the schools to offer teachers comprehensive professional development and students are encouraged to take advantage of summer internships, academic competitions and opportunities to grow intellectually. And every one of the 2,000 TYWLS girls, 74% of whom come from economically disadvantaged families, is encouraged to lead, work collaboratively, and strive for personal excellence.

The success of  the YWLN model has been such that affiliate schools have opened in San Antonio, Austin, Baltimore, Chicago and Lubbock – and more will certainly follow. Which is good news for all of us — because a great education won’t just change the lives of these girls and their families, it will empower them to transform their communities and impact the world. And that’s my sunny news for the day!

To join me in supporting the responsible, effective, awesome work being done by the Young Women’s Leadership Network, click here.

2 thoughts on “Smart girls will change the world!”