How far can a bike go to transform an underdeveloped community? Well, as it turns out, pretty darn far when it’s in the hands of a true bike believer like Michael Linke.

In 2005, Aussie Linke and his wife Clarisse started the Bicycle Empowerment Network to get the population of Namibia on the road to positive change. Bikes can carry five times more weight than a single person and go five times as far, five times as fast as walking – which means that with a bike, rural poor people can be about ten times more productive. They can ride to school, get access to health care, transport goods, or zip back and forth to work quickly and easily.

BEN bike shops are a brisk business. (Recognize the container?)

But Linke quickly discovered that even the process of getting bikes into the hands of people created a virtuous cycle of progress. When BEN started its bicycle distribution program of second hand bikes that had been donated from other countries through international partner Bicycles for Humanity, Linke realized that every container of bikes could literally become a bicycle shop. And he started pedaling that idea far and wide.

I can fix that flat!

For about $25,000, communities in Canada, Australia and America will send a container filled with hundreds of donated bikes, tools, spare parts, and even soccer balls and school supplies to Namibia – and the container itself can then be transformed into a bike shop that brings employment and economic opportunity to small towns in the countryside. BEN technicians train village women and men to maintain, sell, and repair the bikes, creating Bicycle Empowerment Centres. Since 2005, 25 BECs have opened in rural towns in Namibia and one in Zambia, employing 100 men and women and providing 17,477 bikes to those who want to put mettle to the pedal.

Bike ambulances -- not cushy, but they get you there!

But bikes are more than an economic stimulus package, they’re also a health care plan. By outfitting bicycles with steel frames and stretchers, BEN Namibia has created 70 bicycle ambulances for rural communities where emergency transportation does not exist. Bikes are also used by hundreds of Namibian home health care workers, 90% of them women, who have been given bikes that make it easier to deliver supplies, medication and critical care to HIV/AIDS patients– at the lowest operating cost of any transportation mode. 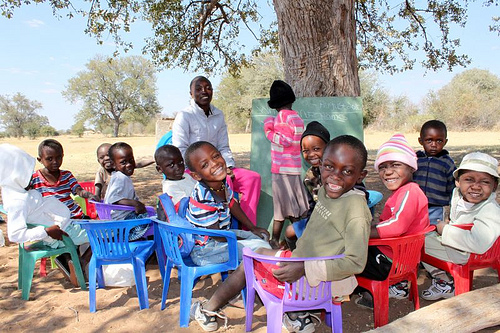 And strictly for sport, Team BENN fields a team of expert cyclists to race across the country, while BEN’s Spin for Life program uses the athletes in AIDS awareness events in rural towns –  where prize bikes are awarded among those who get tested, prevention strategies and condoms are distributed, and health issues are discussed. 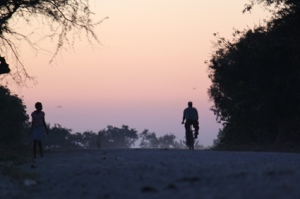 On the road in Namibia.

In a country that only achieved its independence from South Africa in 1990 and where most of the 2.1 million people live in rural poverty, bikes can steer an entire nation towards a better future. And if Bicycle Empowerment Network has anything to do with it, they’ll make sure what goes around, comes around for the people of Namibia. To join me in donating to BEN, a Women, Tools & Technology Ashoka Changemaker, click here!

51 thoughts on “Two wheels of fortune for Africa.”