I’m a big believer in kids spending lots of time outdoors, probably because my seven brothers and sisters and I were routinely kicked out of the house to go play outside. My mother was a complete nut about fresh air, opening our windows at night in Buffalo, New York in the dead of winter, and telling us to “go run around the house twenty times” if she sensed we had any unspent energy we needed to burn off. I idled away half of my formative years climbing trees, traipsing through the woods, and doing cartwheels in the grass, and honestly remember those as the most precious hours of my childhood. 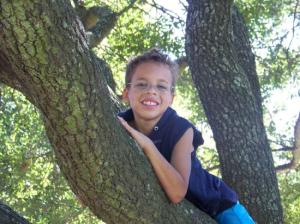 To me, Richard Louv’s Nature Deficit Disorder isn’t just a concept, it’s an epidemic .. and I utterly concur that one’s mental, physical and spiritual health is linked to an experience of nature. Or as Rachel Carson so eloquently put it, “Those who contemplate the beauty of the earth find reserves of strength that will endure as long as life lasts.”

Problem is, where does that leave inner city kids who don’t have the ways or the means to get out and see nature — much less to contemplate its beauty?

Blue Sky backpackers all packed up & ready to roll

That’s where Blue Sky Fund www.blueskyfund.org of Richmond, Virginia comes in. Founded by Fritz Knapp in 2003, the mission of Blue Sky is to give inner city kids the transformative experience of learning through outdoor adventures. In after-school programs, weekend trips, science explorations, and summer “camperships,” the goal of Blue Sky is to teach kids wilderness skills that will directly translate into life skills…and  simply get them outside to have fun.

Lawson with her husband Romesh and sons Paxson & Chanan

Lawson Wijesooriya is the current Executive Director of Blue Sky, mother of two young children, resident of the low-income East End in Richmond, and has a passionate attachment to helping at-risk urban youth. A Phi Beta Kappa Jefferson scholar at UVA, she has a heart for the inner city and a soul for the wilderness — the perfect job requirements for a program director whose job it is to get urban kids Outward Bound.

Last year, Blue Sky gave 96 inner-city Richmond kids, ages 8-18, the incomparable experience of summer camp — complete with ropes courses, camping, fishing, backpacking, rock climbing, hiking and kayaking in the Blue Ridge Mountains. These are the kinds of experiences that never leave you, and can change a young life. Or, as the Blue Sky mission statement so eloquently puts it:  We will transform the inside…..by going outside.

My $100 today goes to Blue Sky and to birthday girl, Lawson Wijesooriya – for giving inner-city kids the opportunity to experience nature, become proficient in wilderness skills, and gain the self-confidence that will take them as far in life as they wish to go. Nothing but Blue Skies do I see.

4 thoughts on “Off with “Guitar Hero” & Into the Wild”