Belize is an amazing place. It’s got the second largest barrier reef in the world off its eastern shores, dotted by 450 pristine islets and islands known as the cayes. With a Mayan background (since 2500 BC), it’s the only nation in Latin America with a British colonial heritage, a sizeable portion of Africans, and the lowest population density in Central America – with a mere 333,200 folks.

That leaves a lot of room for plants, which is really good since Belize is home to 300 different orchids and multiple species of astonishing floral diversity. And nobody is more intent upon protecting that than the Belize Botanic Gardens.

BBG is 45 acres of native and exotic plants growing in the Cayo district of western Belize –a luscious garden in a valley on the banks of the Macal River, surrounded by the Maya Mountain foothills. With two miles of trails featuring a wide variety of native and exotic fruits, palms, hardwoods, ornamentals and plants of the Maya, the garden is the handiwork of founders Ken and Judy duPlooy and a joy to its two newest volunteers, who get to live there for three months, soaking up all its sustainable green beauty.

Bernd Kiekebusch and Lucy Steinitz met 32 years ago in Iceland while camping. He was a mathematician and computer wizard, she worked in development and social issues. They married, adopted two children from Guatemala, worked in D.C., then moved to Namibia for 13 years to work in higher education and with AIDS orphans. Now they’re taking a year off to travel the world, live on 7 continents, visit their grown children in Japan and Israel, and work in service in causes they believe in. Or Belize in.

After a month working in the fertile crescent of the Belizean forest, they’ve fallen in love with the flowers, the orchids, the Blue Morpho butterfly, the bats, and some of the Rainforest Remedies they’ve learned along the way. Like how to strategically insert the stinger of bees near a painful joint to reduce arthritic pain (which they are still waiting to try). And they’re digging the majestic vistas they get to hike up to almost every day.

The view from Mountain Pine Ridge 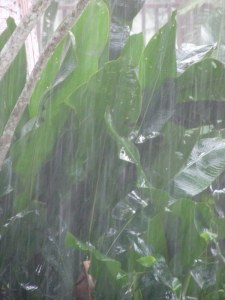 Why they call it Rain forest.

Quite frankly, Bernd and Lucy  are living the life that I’m intending to fall into, the minute I give up my attachment to a tethered life and head out on the road to cover my own 7 continents.

So today in honor of beautiful, meaningful second acts, I’m giving $100 to the Belize Botanic Gardens and waiting to see what Lucy & Bernd do next! To follow Lucy’s gorgeous blog featuring all the above photography, click here.