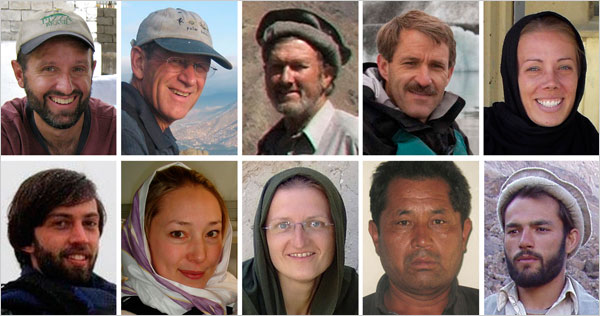 On Thursday, August 5, in the Hindu Kush mountains of northern Afghanistan in Badakhshan province, 10 aid workers were ambushed and killed by Taliban gunmen for being “spies and Christian missionaries.” This group of unpaid volunteer doctors, nurses and technicians comprised the Nuristan Eye Camp and were returning from a 100-mile trek with pack horses to offer eye, dental and medical care to some of the poorest and most remote communities in Afghanistan as part of  International Assistance Mission, a Christian aid group that has operated in Afghanistan since 1966. Here are a few facts on each person we lost (clockwise from top left):

Glen Lapp, 40, of Pennsylvania, was an intensive-care nurse who came to Afghanistan in 2008 and was working with NOOR (the National Organization for Opthalmic Rehabilitation) to organize mobile eye camps to serve communities in remote Afghanistan.

Dr. Tom Little, 61,  of New York, was an Optometrist, Manager of the NOOR Eye Care Program in Afghanistan, and leader of the expedition. He came to Afghanistan with his wife Libby and three daughters in 1976, and set up numerous clinics, eye camps, training workshops and hospitals to serve the Afghan people over the past 35 years.

Dan Terry, 63, of Wisconsin, has been doing aid work in Afghanistan since 1971, bringing health and development services to remote communities. Although he just completed knee surgery, he was eager to make the 100 mile walk into the roadless Parun Valley. He is survived by a wife, three daughters and one granddaughter.

Dr. Tom Grams, 51, of Colorado was a personal friend of Dr. Little and a dentist from Durango whose passion to serve remote communities included a trek halfway up Mt. Everest, and practice in the etiquette of the burka, so he could offer Afghan women essential dental care.

Cheryl Beckett, 32, of Tennessee had worked in Afghanistan since 2005 on nutrition, gardening, and mother/child health. She was on the mission to provide translation for women patients, and is survived by her parents and 3 siblings.

Ahmed Jawed, 24, of Afghanistan was the cook at NOOR who often accompanied the team on Eye Camp trips. He was beloved for his good nature and sense of humor and is survived by a wife and three small children.

Mahram Ali, 51, of Afghanistan was a watchman at NOOR since 2007, who was on the mission to provide security for the vehicles while the group was trekking. He is survived by a wife and 3 children, two of them disabled.

Daniela Beyer, 35, of Germany was a linguist and translator who was fluent in Dari and had worked for IAM from 2007-9. She had joined the Eye Camp to translate for women patients and is survived by her parents and three siblings.

Dr. Karen Woo, 36, of England was a dancer, performer and General Surgeon who had moved to Afghanistan two years ago. She joined the Eye Camp as team doctor and to bring maternal health care to the Nuristan communities.  She was to be married in a few weeks.

Brian Carderelli, 25, of Pennsylvania, was an Eagle Scout, professional videographer and PR manager for the International School in Kabul. Since he moved to Kabul in September, he’d volunteered with a number of humanitarian and development organizations.

I’m giving $100 today to the International Assistance Mission in recognition of these 10 individuals who gave their lives in its service. IAM was founded by teachers and medical workers and its mission is to work with and train Afghans in Health and Economic Development. IAM’s hallmark achievement is the National Organization for Ophthalmic Rehabilitation (NOOR) where Dr. Tom Little was the driving force behind its outreach programs to remote areas, 4 hospitals, teaching programs and clinics.

The more I read about this tragedy and the individuals who were lost, the less I understand about the people who feel justified in taking these lives. On July 11, Nate Henn, a boy from my home town of Wilmington, Delaware, was working with Invisible Children (see post on 6/23) in Uganda and killed in a terrorist explosion at a rugby field. He was visiting some of the children he’d been putting through school.

I’m praying for peace and the end of killings like these. And I’m praying for the families that these brave, compassionate, and giving people leave behind.